On Friday, June 24 Leadership Prince William (LPW) held their Evening of Excellence Gala and Awards Dinner for the first time since 2019. The event was attended by 150 alumni and supporters celebrating the 15th anniversary of Greater Prince William’s premier community leadership program. The event serves as a fundraiser and end- of-year celebration for the organization, which has to-date graduated over 500 business and community leaders, not-for-profit executives, elected officials and more. Charles Gilliam was also introduced as Leadership Prince William’s Interim Executive Director during the event.

Neabsco District Supervisor, Victor Angry –a 2019 graduate of LPW’s Signature Program–served as Master of Ceremonies for the Evening of Excellence, recognizing award nominees and recipients for the Kathy Ellington Alumni Leadership Award. He also helped LPW raise $13,000 in donations during the course of the event.

The Kathy Ellington Alumni Leadership Award (KEALA) is named for LPW’s Founding Executive Director, and honors a past graduate of the Signature Program who has used their vision, leadership, skills and talents to accomplish something notable that has positively impacted Prince William County, Manassas and Manassas Park.

The Honorable Cydny Neville, Dumfries Town Councilwoman, Founder of the Neville Empowerment Network, and a 2013 graduate of Leadership Prince William was named as the KEALA recipient during the 2022 Evening of Excellence.

When she graduated from the LPW Signature Program in 2013, Cydny Neville was the Director of Community Services for the Town of Dumfries. Today she serves on the Dumfries Town Council and uses her position to create policies that fight discrimination and promote equity amongst her diverse constituency.

Among the long list of her pet initiatives has been updating the Town’s nondiscrimination policy to include protections based on gender identity and sexual orientation; moving the Town’s Election Day from May to November; seeing that Election Day was named as a holiday for Town Staff (making Dumfries the first municipality in VA to do so for all staff) and championing a means for the Town’s Police Department to work with Prince William County Police to better serve citizens with disabilities.

Through her Neville Empowerment Network she helps future leaders find their voices so they can inspire others to greatness along the way. The organization’s efforts include facilitated courses in the development of Healthy School Cultures; Entrepreneur Seminars; and The Culturally Competent Leader Program–an interactive leadership development program crafted to train teams to be effective, results-driven leaders in a culturally diverse environment.

In the words of her nominator, “Cydny not only ‘talks the talk’ and ‘walks the walk,’ but she inspires everyone around her to join her in her walk and to take action, always with the goal of inclusivity and justice.”

Additional nominees for the Kathy Ellington Alumni Leadership Award were:

Nominations were submitted by LPW Alumni and Board Members, then reviewed and scored by LPW’s Executive Committee. For more information on the award, or our new Interim Executive Director, Charles Gilliam, email Charles@leadershipprincewilliam.org. 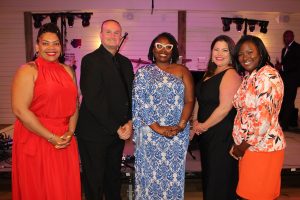