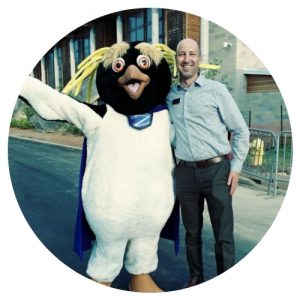 Tell us a little about your job:

I’m the Manager of Individual Philanthropy for the Detroit Zoological Society. As such, I raise funds for capital and major campaigns at the Zoo. Some of the projects I raise funds for are animal habitat improvements and renovations and our campaign to build a new facility, the Great Lakes Nature Center. The Detroit Zoo was built in 1928 and occupies 125 acres in Royal Oak, Michigan just outside Detroit. I have a team of 14 people who help raise funds for the Zoo, which makes my role highly specialized. Unlike the DC metro area, most donors I work with are Michigan natives and as such spent a lot of time here as children and in growing up. As someone new to Michigan, that means I need to know about the Zoo’s history and what’s new and exciting. And there’s a lot of really cool things at the Zoo: we were one of the first in the country to have barless enclosures throughout the Zoo; we have one of the largest Polar Bear habitats of any zoo in the country; and our penguin center is the largest and most advanced facility of its kind.

What’s new since you graduated from LPW?

I moved to Michigan and started a new job.

What is your favorite LPW memory?

There are so many, but time spent with Jennifer Decker (Hylton Performing Arts Center) was always fun. We had the same sense of humor and just clicked. There were a lot of jokes and just funny off-the-cuff moments that I’ll always remember.

How has Leadership Prince William helped you get to where you are today?

LPW has instilled a focus on leadership, specifically what type of leader you are and how that fits with others in your organization. The second part, how my style fits with others in my organization is not something I thought much about before enrolling in the program. I was at a coffee shop last week and actually overheard two people discussing different types of leadership, similar to what we learned in the program. It really is something that is used and respected as a professional.

What does leadership mean to you?

Towards the end of the session, we had to bring in (and leave) something important and explain how that related to leadership to us. I told the story of deciding to stay home to raise my son. Leadership to me is making hard decisions.

I’m grateful I had the chance to enroll in the program. I want to say thanks to my former boss Mary Finnigan and the Benedictine Sisters of Virginia for allowing me the opportunity to take time from work to attend. It truly made me a better employee, and leader.